Written by Karl Gibbs on 20 January 2020. Posted in Articles, News.

This is an idea about how we can combat Blue Monday. Today is officially meant to be the most depressing day of the year (at least things can only get better). The Christmas decorations are down, the days are still short and it is a long time until the next significant break for many of us. 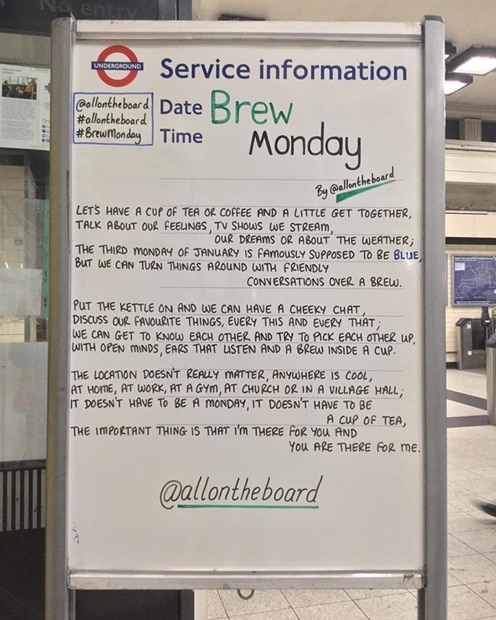 Just to compound matters we have just started a cold snap. The forecaster’s advice is to check on older or vulnerable people and make sure they are OK.

There is an increased risk of stroke in the cold. Bear in mind that, even if the person is wearing extra jumpers, if the air they breathe is consistently below 18 degrees C they will become more susceptible to respiratory infections. If someone has a broken heating system this is when it might become apparent. With an Assure system you can look online to make sure that the home is warm and even set a minimum temperature so that if the person is at home and the temperature drops below this minimum you will get a message to let you know – we call it the ‘cold at home’ alert.

Many in our communities have fading eyesight as they age making them less confident about going out at night and the long dark evenings can leave them feeling isolated.

So far Blue Monday doesn’t sound like a bundle of laughs, but ‘Brew Monday’ does its best to ‘turn that frown upside down’. If you were passing through some London Underground stations you might have seen this poem on a notice board.

Instead of feeling blue, connect with someone. Ask a neighbour over, put the kettle on, brew some tea and have a chat. It doesn’t need to be over anything important. If you don’t know what their favourite pasta shape is that could be a starting point. If they are uncomfortable coming out at night, take some cake around and ask if you can share it.

As the poem suggests, it doesn’t need to be at home (is there someone who might appreciate a trip to a pub for a different kind of brew?) and it doesn’t have to be today – but today is as good a day as any!

It is important in the colder weather and long nights that those of us who can look out, for those who need it.

As the Zulu idea of Ubuntu proposes, we are defined by how we relate to those around us (they say ‘I am because we are’). So let’s put in a bit of effort to connect – over a brew.

To find out more have a look at the Samaritans information page.

If you know something is wrong then please contact an expert immediately.

Your doctor can help with medical problems, or if you are in an emotional crisis you could contact the Samaritans. You can call them free from any phone on 116 123, email jo@samaritans.org or you may have a branch near you that you can visit (see www.samaritans.org/branches).

If the cause of your crisis is feeling overwhelmed by a financial or legal issue then they may suggest a local legal centre or the Citizens Advice Bureau as a good first step to solving your issues.

There is a Spanish phrase that says ‘Where there is a will, there are many ways’. Just because what you have tried so far has not worked does not mean there is nothing else to try and these people are expert at finding the right solution in a crisis, and they care.